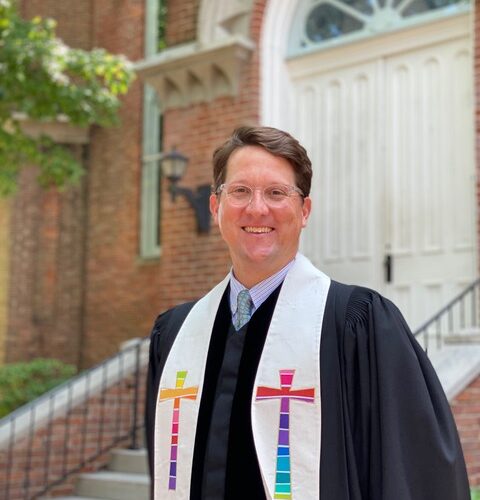 Pastor Barrett C. Milner began his ministry with the First Presbyterian Church family in Oxford in June of 2020.  Before answering the call to serve as the congregation’s 26th Pastor and Head of Staff, he most recently served churches in New Orleans, LA and Lexington, KY.  Rev. Milner received his undergraduate degree from the University of Kentucky and completed his Master of Divinity at the Lexington Theological Seminary.  Barrett is married to his life-long friend and fellow Lexington native, Carrie, and together they are the proud parents of three wonderful, charming, and incorrigible boys: Cole, Tucker, and Price.

Along with a heart for mission and justice and a devotion to his vocation, Barrett also brings to Oxford and the First Church family a love of books, of good conversation, and of music—both playing and listening.  He brings his passion for all things immersed in God’s creation: hiking, fishing, canoeing, and simply being.  And he brings with him, too, an open mind, an open heart, and an openness to the murmurings and nudging of the Spirit. 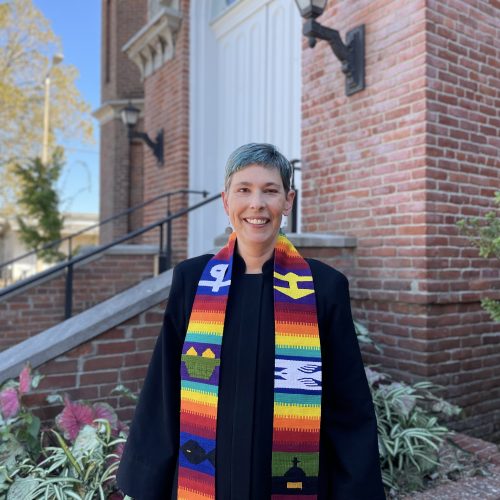 I grew up in West Michigan, and attended seminary at Union Theological Seminary in Richmond, Virginia.  Since then, I have served as a theological educator in Guatemala, served churches in pastoral ministry for more than twenty years in New York, California, and Mississippi, and worked in the wider governing bodies of the the Presbyterian Church (U.S.A.) as a Consultant for Leadership Development for the Synod of the Northeast and Assistant Stated Clerk for the Presbytery of San Joaquin. In California I also spent four years as a Hospice Spiritual Counselor. I have been helping churches cope with change as a Transitional Pastor since moving to Oxford in 2018. Social justice and peacemaking work are my passions, along with hiking and family adventures with our son Chai, daughter Nalani, and spouse Michael Fagans. I am looking forward to getting to know you, and discovering how God is at work at FPC Oxford. 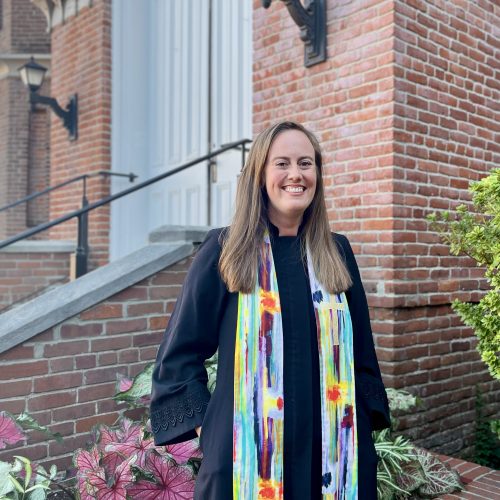 A North Carolina native with Ohioan roots, Allison landed in Oxford in February 2017, and serves as the Campus Minister at UKirk Ole Miss, as well as the Presbytery of St. Andrew’s Associate Executive Presbyter. She’s an alumna of the PC(USA)’s Young Adult Volunteer program, and has been on staff at camps in both Carolinas, Georgia, and Florida, and is lucky to now offer support to Camp Hopewell here in Oxford. Her favorite things include National Parks, birds, and the best Southern vegetable — mac and cheese.

UKirk meets in FPC’s annex building behind the Lyric Theater. For the most up-to-date info on UKirk events, visit www.ukirkolemiss.org or follow @ukirkolemiss on Instagram. 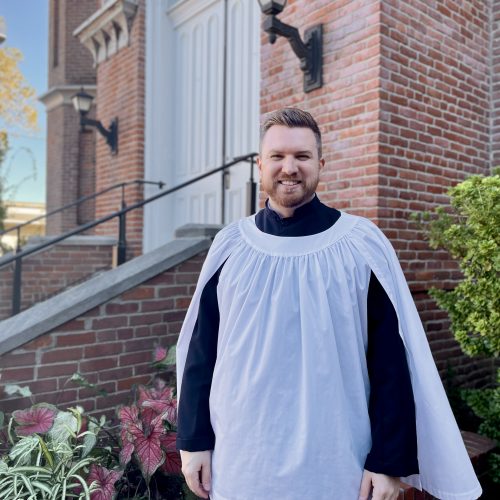 He is a graduate of the University of Southern Mississippi where he earned a Master of Music in Choral Conducting and a Bachelor of Music in Piano Performance. His primary instructors were Dr. Gregory Fuller and Dr. Ellen Price Elder. He completed the Certificate in Injury-Preventive Keyboard Technique at Salem College in Winston-Salem, North Carolina, under Dr. Barbara Lister-Sink and continues to focus studies and performance on women composers of sacred music. His research on the choral music of Margaret Sandresky has been received at numerous conferences, including the Music by Women Festival. Creighton has presented sessions on sacred music for the Mississippi and North Carolina American Choral Directors Association and the Mississippi Music Teachers Association.

Through his work as a collaborative artist, he has participated in multiple world premieres by award-winning composers including Mack Wilberg, James Quitman Mulholland, Richard Burchard, Tõnu Kõrvits, and Galina Grigorjeva.

As Co-Director of Oxford Civic Chorus and as a collaborative pianist in the University of Mississippi music department, Creighton is active in the Oxford community. He is the Subdean of the Oxford-University of Mississippi chapter of the American Guild of Organists, and holds memberships with the Church Music Institute, the Presbyterian Association of Musicians, and the American Choral Directors Association. 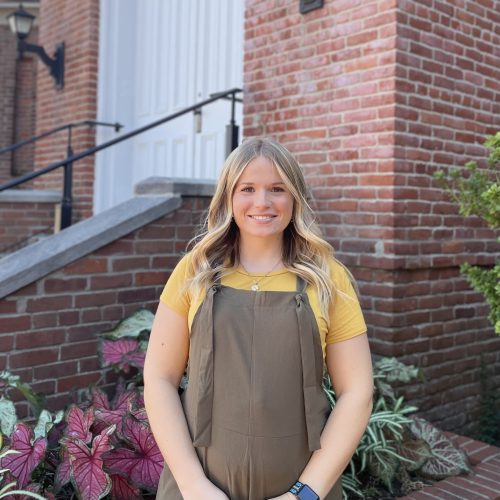 Kaitlin Hill joined our church staff in early 2022 as our Communications Director and Administrative Assistant. She is in charge of weekly/monthly/yearly tasks of keeping our congregation in the loop of what is going on in our FPC community.

Kaitlin grew up in Olive Branch, MS. She attended Holmes Community College to play soccer, and then moved onto Belhaven University to play soccer there, while also receiving her Bachelor of Science in Exercise Science. While she had all intentions of being a Physical Therapist once graduating, life decided other avenues for her. “I never would have imagined I would end up in a communications position, but I would not trade it for anything. I cherish he connections I have made with the people of the church and the staff I work alongside with. Life has a funny way of working out, it is all about trusting the process. I am very happy with where it has lead me thus far”.  Kaitlin currently resides in Oxford with her boyfriend Austin, and they are expecting a little girl, Elsie Ruth, come February 2023. 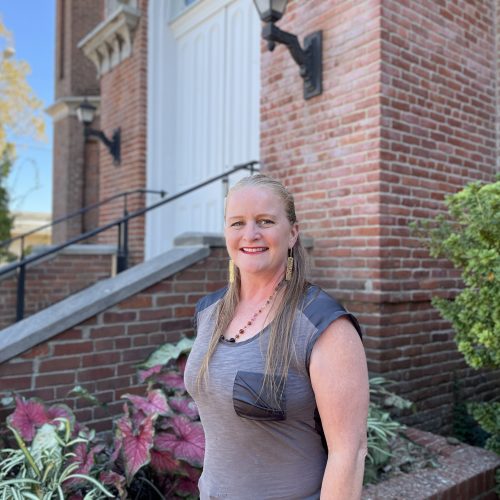 Wendy Brady recently joined our staff as Nursery Director.
She is a native of Brandon (MS) and a graduate of William Carey University (Hattiesburg, MS). She majored in business and minors in English and Piano. Although Wendy desired to be a teacher (her professor talked her out of it) and have ‘a football team’, she is married to Will- and blessed with a son, “Little Will”, who is 11. Wendy’s family relocated to Oxford in 2019. She enjoys listening to music, running, cooking, and traveling with her boys. 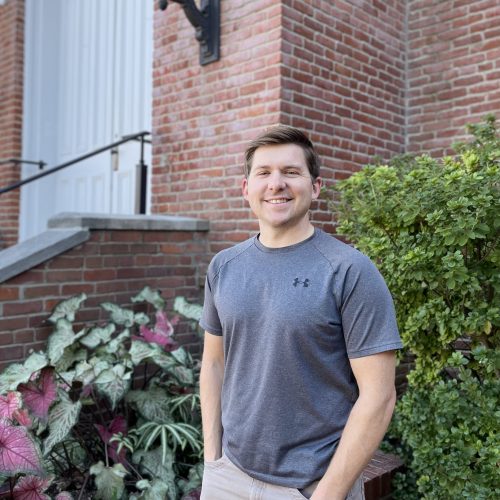 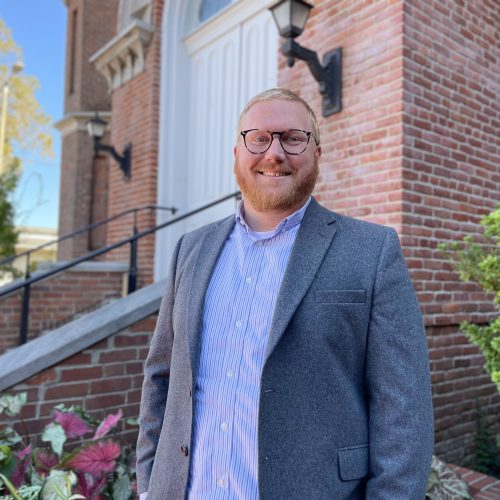 Dave Garvey originally hails from the great state of Indiana. After graduating from Indiana University, he spent time working with young people in churches and parachurches in Indiana, Wisconsin, Tennessee and now Mississippi. Dave joined the staff at First Presbyterian Church in Oxford in March of 20222 to serve as the Director of Faith Formation for Children and Youth. His passion in ministry is found in helping young people realize the ways that God is working in their lives so that they can join in on God’s transforming work in their families, schools, churches, communities, and worlds.

When not at church, you will most likely find Dave deep in the misery of cheering for the Indiana Hoosiers and the Indianapolis Colts, ‘fixing’ something in the yard, or finding some adventure with his wife Christian, daughter Bowen and son Red.

Director of Faith Formation for Children and Youth